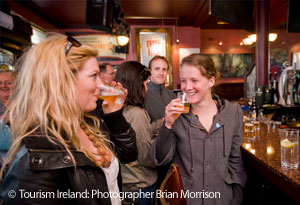 Nineteen years after it opened, the chain’s first Dublin pub is thriving Porterhouse Temple Bar: walls are heavy with craft beer bottles, the stairwell lined with awards.
It’s 19 years since Porterhouse opened their brewhouse on Parliament Street in Dublin 2. It wasn’t such a busy spot then: craft beer was foreign, Temple Bar was in its infancy, the boom was a pipe dream and a group of young men taking on the might of the brewing industry seemed like a crazy waste of time.

Nearly two decades, six bars, a devoted customer base and multiple awards later and they seem to have made their point. They still meet in Temple Bar on Thursday nights for a tasting and they’d be happy for you to join in. It seems they simply love beer and the business of selling it.

Get them talking about the early days and you’ll hear tales of basement brewing and apartment living, legal challenges and crazy ambitions. A then 25-year- old Peter Mosley came on board with his degree in brewing – a rare sight in Dublin in those days. Getting part-paid in pints and planning to stay a year, he’s now the group’s master brewer, the engine behind all their beers.

Tipperary man Liam LaHart, now more used to flying out to Porterhouse’s New York operation, was pulling pints behind the bar then and as they talk they probably don’t appreciate the Boy’sOwn adventure they’re describing. And how exciting it must have been to be among the first to put craft beer on the map here.

The Temple Bar is their home. The walls are heavy with craft beer bottles brought in by customers in exchange for beer, awards line the stairwell and although the in-house brewery has moved to a bigger location, craft is still at its heart. But they haven’t grown up completely: their latest brew is a gorgeous 8 per cent double IPA with a sweet malty taste. The name? Hopped to F***. There’s life in the old dog yet. – Gary Quinn

The terrifying - but funny - world of the disgruntled TripAdvisor reviewer

666 years in the making, is this Ireland's most haunted house?