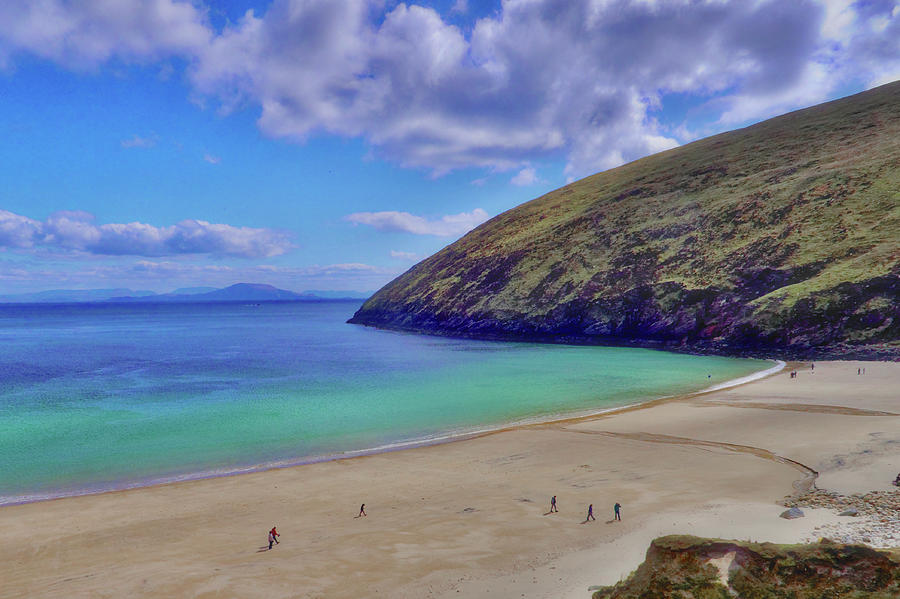 Tucked away in one of the most remote parts of Ireland

What does Achill Island have in common with Tahiti, Iceland, California and the Seychelles?

What does Achill Island have in common with Tahiti, Iceland, California and the Seychelles?
The answer lies on the western end of the island and glorious Keem Bay which was last week selected by renowned travel writer Pól Ó Conghaile in his list of ten breathtaking beaches around the world.
Keem Bay was the only Irish beach to make the shortlist, joining exotic locations like Matira Point in Tahiti and Anse Source D’Argent in the Seychelles.
Pól Ó Conghaile compiled the list for last Thursday’s Irish Independent and said the following of Keem: “Achill boasts five Blue Flag beaches, but this is my favourite by a country mile. Part of the delight is the distance you have to travel to get there – once you hit Westport, Keem is at least another hour west.
“Keep driving, over the Currane Peninsula, across the bridge and boggy island interior, until the road runs out at one of the Wild Atlantic Way’s finest Signature Discovery points. Framed by cliffs, undeveloped save for an old stone cottage and heaven for snorkelers and sea kayakers, it’s a first impression that lasts a very long time. On my most recent visit, the lifeguard told me a kayaker had just been paddling with a basking shark. Magic.”
Pól Ó Conghaile was voted Irish Travel Writer of the Year 2013.
And that was not the end of the praise for Keem Bay in the national media last week. In Friday’s Irish Examiner, Ireland’s ten most beautiful beaches were selected and Keem Bay was, unsurprisingly, amongst them.
The piece on Keem said: “Located on the fair and famous Achill Island, Keem Bay is picture-perfect and is often overlooked. Tucked away in one of the most remote parts of Ireland, Keem is located on the western tip of Achill. Its stunning cliff and ocean views make visitors feel they’re walking into a postcard.
“During the summer months, the various pubs around the island come alive with trad music, ensuring a trip to Keem stays interesting long into the night.”
Keem Bay was the only Mayo beach included in this list although Enniscrone, just over the Sligo border in Ballina, was also included as was renowned beaches like Inchydoney in Cork, Inch in Kerry and Lahinch in Clare.