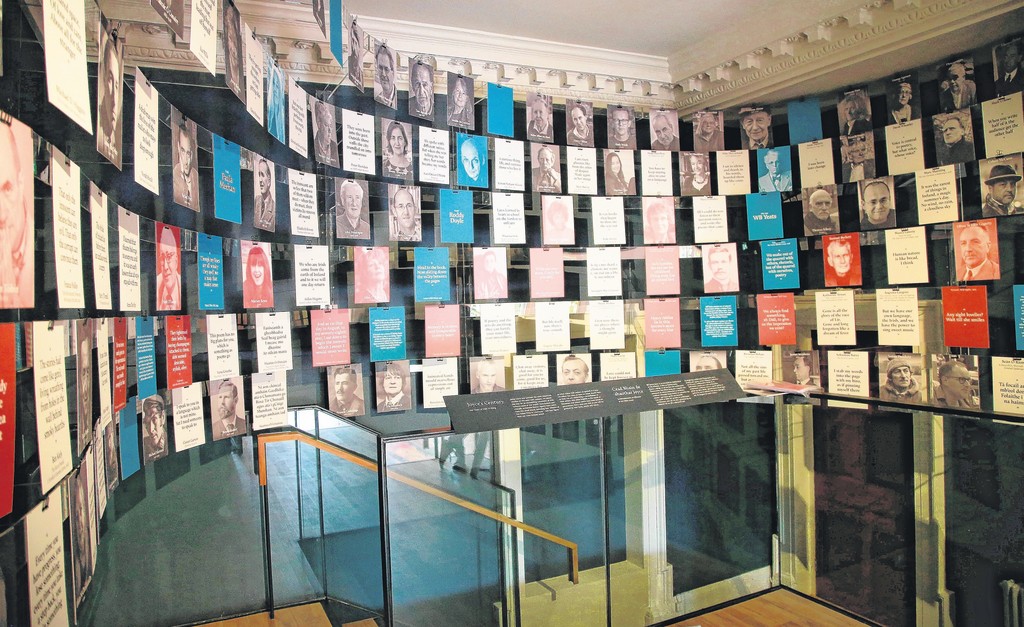 the new Museum of Literature Ireland (MoLI) opens its doors

If walls could talk, they’d whisper stories, putting tales and characters into your head: which is, of course, exactly what a good book does. Books inspire, provoke, inform, excite. They set down histories, and make markers for their times. So, as the new Museum of Literature Ireland (MoLI) opens its doors to the public on Culture Night, what exactly will it do that a good book can’t?

When you’re lost in a book, the characters come alive. We all know the feeling, when a TV or film adaptation just doesn’t cut it. The hero’s hair isn’t how you imagined it. That’s not the street you pictured. Jane Austen was clever: she never actually described Mr Darcy. That way everyone can imagine into him their ideal romantic hero.

But if film and TV, with all their resources, don’t always do the job when it comes to bringing literature to life, what is the role of a literary museum? Another way of addressing the question is to ask what a literature lover is looking for in a museum. What does a home-grown bibliophile, or a visitor to Dublin as a Unesco City of Literature, expect?
Number one is probably good bookshops. Then there are literary trails and tours, and the chance to visit real-life locations. The opportunity to see where someone wrote, lived and died is always a draw. Perhaps it comes from the same urge that afflicts autograph hunters at one level, and those who bid thousands for the possessions of the famous at another: we can’t help feeling that greatness, or a spark of it, might be somehow contained in them, even transmitted by them. But the Hard Rock Café, with all its memorabilia, is not the music. The music is the thing and, like literature, it is infinitely portable and transmittable.

With art, it is the work of art that is the object, not the paintbrush of the artist. The closest thing we have to a museum of artists is the Francis Bacon Studio at the Hugh Lane. An iconic painting in a gallery turns that gallery, and its city, into a destination. But literature is different. Unless you’re talking about The Book of Kells, literature makes pictures in the brain. And so literary visitors to Dublin are looking for a different sense of things: they want to come to the city, and a country that spawned such an array of literary greats, and see if they can find some substance to the intangible thing that we call inspiration.

A museum can be a focus for that, and Simon O’Connor, MoLI’s director, has plenty of experience in mining objects for stories, through his tenure at the Little Museum of Dublin, just across St Stephen’s Green from MoLI. Certainly MoLI shares the Little Museum’s witty touches, a directional sign for the museum’s toilets is headed “meeting of the waters” from Ulysses. O’Connor notes that MoLI is also part of a newer battle for the soul of Dublin. “We’re in competition with a lot of venues backed by private drinks companies, with all their marketing budgets.” He talks of coming into London by Tube, and the policy of promoting advertisements for the city’s major museums. He’s right, in Dublin, you could be forgiven for thinking it’s all about the distilleries and the Guinness Storehouse.

Museums also guard and protect objects. In the Dublin Writers Museum on Parnell Square, you can see Brendan Behan’s typewriter, Mary Lavin’s teddy bear, and Sam Beckett’s telephone. There are also copies of letters and first editions, displayed in cases, under glass. Set up by Dublin Tourism, and run by Fáilte Ireland, the Writers Museum has four exhibition rooms in an elegant Georgian townhouse. In 2018 it welcomed approximately 26,000 visitors (MoLI’s target is 85,000 in its first year), and while they don’t record demographics, they estimate that most are from overseas, including English language school groups.

A good museum is also a museum of itself. Think of the Natural History Museum on Merrion Street. Built in 1856, it is beloved for its building and Victorian display cases, almost as much as the objects it contains. On a recent visit to the Writers Museum, even though it was only established in 1991, I had a similar sense of times past. I had the feeling that the other people there were trying to find the heart of the matter. It’s a quiet, gently charming place, but I couldn’t help feeling that even though they have the requisite death masks, portraits and personal items, it didn’t quite ignite. I couldn’t help thinking of Louis MacNeice’s Elegy for Minor Poets, “Who might have caught fire had only a spark occurred”
Exploring MoLI (say it out loud, and think of Molly Bloom is the idea) ahead of its opening, there are plenty of things to spark.

An immersive audio visual installation, A Riverrrun of Language, presents Irish writing from the earliest times, through recorded readings and projections. Dear Dirty Dublin maps Joyce’s city through sculpture and film, and a series of temporary exhibitions will focus on individual writers, starting with Kate O’Brien, curated by her grand-niece, actress Kathy Rose O’Brien.

The exhibitions are also backed up by borrowings from the National Library’s Collections. According to NLI director Sandra Collins, the library cares for more than 10 million items, so there’s a lot to draw from, and material will be rotated as exhibitions change. As the venture is a partnership between UCD and the National Library, the collaboration continues with scholarly exhibitions exploring publishing, writing, and how they shaped the State.

A quick flavour
“Visitors to literary exhibitions have different needs,” says Collins. “Some people want to get a quick flavour of a writer they don’t know well, see one amazing item, or explore one remarkable story that they can take away with them. Others want to spend hours examining artefacts in detail and really immersing themselves in the subject.” The biggest thing, however, she says, is “that sense of intimate connection with a writer, seeing the actual paper they wrote on and watching their works come into being in draft after draft.” Maybe that’s the moment when you think, “yes, I could do this too”.

The MoLI building is exciting too. Newman House has a history. Once the family home of Thomas (Buck) Whaley, the famous gambler and member of the Irish House of Commons, the house was sold to Charles Bianconi. But Bianconi didn’t want the house for himself. The Italian-Irish entrepreneur, who had opened up the Irish countryside with his network of horse-drawn coaches, was buying it for the Catholic University, now UCD. As Whaley’s father was a notorious anti-Catholic, Bianconi stepped in to pose as the buyer.
Famous alumni and residents of Newman House include Gerard Manley Hopkins, Mary Lavin, Kate O’Brien, Flann O’Brien and Maeve Binchy. James Joyce had his graduation photographs taken under the ash tree in what is now one of Dublin’s few accessible historic house gardens. Enjoy the view from the café, which is also reachable via the Iveagh Gardens.

Margaret Kelleher, chair of Anglo-Irish literature and drama at UCD, says that MoLI aims to continue the inspirational tradition. “On the top floor, visitors will be able to study Joyce’s notebooks and learn about his unique writing process, then listen to prompts from contemporary writers before writing ‘a first line’ themselves.” In this way, she says, the journey through the museum is also one from reading to possibly writing, yourself.

In all this, MoLI has stolen a march on the now-paused Parnell Square Cultural Quarter development, which is home to Poetry Ireland as well as the Writers Museum. Looking at MoLI’s exciting interactive installations, and the famous notebooks showing Joyce’s endless writings and revisings, I’m struck by two things: one, that it’s satisfying how even in this digital age we still cleave to objects; and two, that today’s writers won’t leave such artefacts. Even the first drafts of this article are invisible, lurking only somewhere in the hard drive of my computer.

Galway 2020 European Capital of Culture. These are just some of the highlights