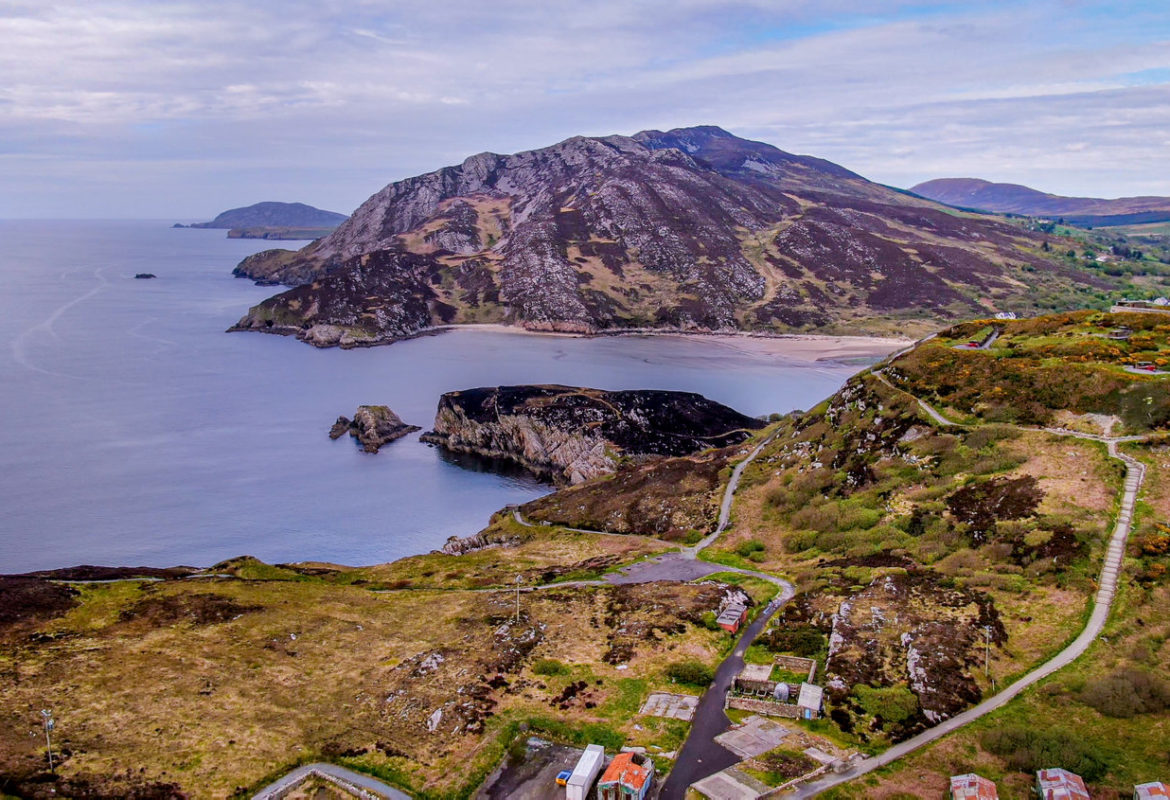 Sitting at the table beside us in Farran’s bar, the most northerly pub in Ireland, was a group of tourists from Atlanta, Georgia. Like us, they had come for comfort food after exploring the breathtaking scenery on a blustery day in Malin Head.

One tells the server: “I ordered a chicken and ‘tomayto’ sandwich.”

“Tom-Ato, you mean,” quips the friendly barman as he lays the dish in front of the American. “You won’t find any tomaytos ‘round here…”

After a little chuckle to ourselves, myself and my companion turn our attention back to our own meal: a mountain of fresh prawns laid on top of melt-in-the-mouth buttery soda bread and surrounded by crisp iceberg lettuce, sweetcorn, beetroot, a smattering of bright red cherry tomAtoes and unmistakeably-Irish creamy potato salad.

We had come for their famous crab open sandwich – all sold out when we arrived – but the prawn version was a more-than-satisfactory substitute: simple, hearty and wholesome.

The Guinness is “perfect” here too (according to my pal) and the pool table in the front room means that one could happily while away an entire afternoon in this cosy local – which boasts a huge green mural of Yoda painted on its side wall.

As mentioned, we came to Farran’s for the crab: Peter, the proprietor of the cute little Curiosity Shop up the road (above) had recommended it to us. Drop in to browse his collection of vintage knick knacks and trinkets (think your nanny’s mantelpiece, circa 1988) and he’ll tell you all about when Star Wars came to town.

“They plugged the camera right in there,” he says, pointing to a socket on the table in front of him before showing us some laminated photographs of the film crew on site.

Admittedly, I’m not a fan of Luke Skywalker et al, but it’s easy to see why Malin Head was chosen as the backdrop for scenes from ‘The Last Jedi’. The view from the Banba’s Crown lookout point is amazing. And the exhilarating walk from there along the dramatic cliff-edge to ‘Hell’s Hole’, a subterranean cavern at the end of the trail, is something everyone should experience.

Spanning approximately 650 metres, the walk isn’t too strenuous and the sights along the way of those jagged rocks jutting out from an electric blue Atlantic Ocean are stunning.

Back at the car park, vendors sell bits and bobs of touristy paraphernalia, as well as snacks and drinks if you’ve worked up a thirst.

Malin Head is, of course, at the tip of the Inishowen Peninsula – Ireland’s largest peninsula, situated in the north west of the country. We were here for the weekend, and had travelled to the scenic hot spot via the hills of Donegal from our base at the Redcastle Oceanfront Hotel in Moville.

The hotel is ideally perched on Lough Foyle, and we were lucky to have a room with a balcony overlooking the shore. Also sitting right on the water is the hotel’s restaurant, fittingly called The Edge. A table by the window gives the impression that you’re actually floating on the ocean – so anyone prone to a bout of seasickness should probably avoid this vantage point!

On checking in, head concierge Gerry McKeever informed us proudly that The Edge has been making waves in culinary circles, recently earning its second AA Rosette. On the Friday night we visited, there was an amuse-bouche of blue cheese mousse with pickled shallots and purple potatoes: a sensational appetiser that left only a bitter taste of regret that there wasn’t more of it to enjoy!

For starters, a Burtonpost Crab Salad with Avocado, Yuzu and Elderflower Kombucha was deliciously light. The flavours of the yuzu (a small, yellow citrus fruit commonly used in Japanese cuisine) and kombucha (a fermented tea drink) were lovely and fresh, and left plenty of room for a main course of perfectly cooked fillet of hake.

To finish, my ever-accommodating dessert stomach welcomed a ‘Yoghurt Mousse and Salted Baked Pineapple with a Cashew and Coconut Granola’. The winning combination of light-as-air mousse, juicy, tangy fruit and crunchy cereal was heavenly, and the whole dish tasted something like a scrumptiously sweet breakfast – which isn’t, by any means, a complaint, since breakfast happens to be my favourite meal of the day…

Gerry proved true to his word… no wonder he was named Concierge of the Year a couple of years back. During our stay, he was full of useful tips on places to discover around Inishowen – from the golden sands of Pollan Bay Beach and the award-winning chowder at Nancy’s Barn in Ballyliffin to the interactive historic tours at the Doagh Famine Village in Lagacurra.

And indeed, the hotel’s Cora Organic Spa also came highly recommended (FYI: their relaxing ‘Total Massage Journey’ full-body treatment is well worth the splurge). The spa is a lovely calm retreat to unwind in after a day’s sightseeing. And there are so many gems to discover around the peninsula – I better start planning return trip soon!

Tucked away in one of the most remote parts of Ireland